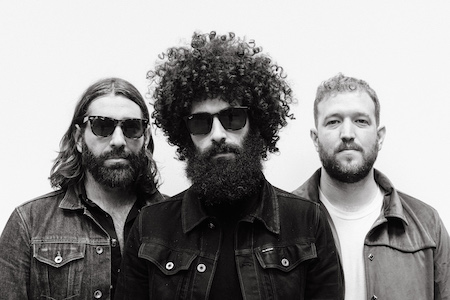 GA-20 was formed by friends Pat Faherty and Matthew Stubbs in Boston, MA in 2018. The project was born out of their mutual love of heavy traditional Blues, R&B, and Rock & Roll of the late 50s and early 60s. Faherty and Stubbs bonded over legendary artists like Lazy Lester, J.B. Lenoir, Earl Hooker, Buddy Guy, Otis Rush and Junior Wells. Feeling a void in current music, the duo have set out to write, record and perform a modern version of this beloved art form. Joined by drummer Tim Carman in 2019, GA-20 is a trio of 2 guitars, vocals and drums. Raw, passionate and honest performance, both on stage and in the studio, is the only goal.

GA-20 released their debut album “Lonely Soul” Oct 18th 2019 on Karma Chief / Colemine Records. The album debuted at #2 on the Billboard blues charts. “Live: Vol. 1”, released the following year, debuted at #1 on the Billboard blues charts and brought the band’s live sound to a wider audience. Medium.com declared, “This is the kind of music that travels through time while taking from the era where it was born and turning it into something fresh. Dirty and raw…timeless and modern.” In June 2021 GA-20 announced the new album “GA-20 Does Hound Dog Taylor: Try It…You Might Like It!,” a 50th anniversary celebration of Hound Dog Taylor, to be released August 20 via Colemine Records in partnership with the legendary Alligator Records.

Stubbs has spent the past 13 years as guitarist for Blues legend Charlie Musselwhite. During that time he has also backed up and toured with such Blues giants as John Hammond, James Cotton, Junior Watson and James Harman. Stubbs also leads his own original instrumental psych-rock band, 'The Antiguas.’

About the opener:
Born and raised in central New Jersey, Jonah Tolchin began his career as a DIY artist, hitting the road as a teenager and self-releasing his own music until signing with Yep Roc for his critically acclaimed 2014 label debut, Clover Lane. Recorded in Nashville with a slew of special guests including Los Lobos' Steve Berlin and Deer Tick's John McCauley, the album prompted Uncut to rave that Tolchin "demonstrates the finesse and maturity of someone like Jason Isbell” and NPR to proclaim him "a promising new artist who artfully occupies the gulf between old-school tradition and contemporary appropriation.”

Tolchin followed it up in 2016 with the similarly well-received Thousand Mile Night, which racked up more than 10 million streams on Spotify with its title track alone, and 2019’s Fires for the Cold, a bittersweet meditation on loss and redemption that featured appearances by Jackson Browne, Rickie Lee Jones, and Sara Watkins. Along the way, Tolchin toured the US and Europe extensively, sharing bills with the likes of Mandolin Orange, Chuck Prophet, Gregg Allman, Chris Smither, Dave and Phil Alvin, and Tony Joe White.