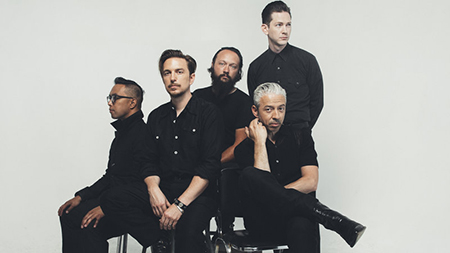 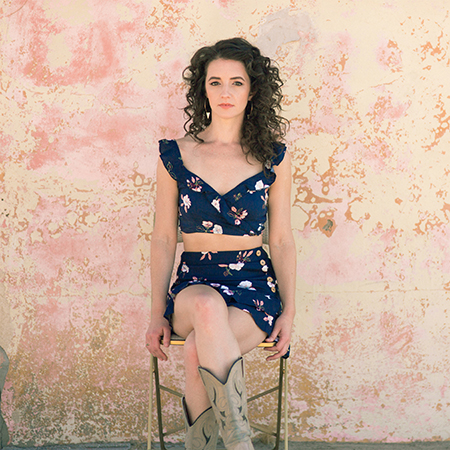 $33 Advance | $38 Day
Doors 7pm | Michaela Anne kicks off the show at 8pm.
**This show has been rescheduled from Friday, May 1st to Saturday, August 22nd. All tickets for the original date will be honored for the new date. Please contact the box office at 508-324-1926 or boxoffice@narrowscenter.org with any questions.**

"Signs & Signifiers is 10 years old this year, and we thought it would be a blast to head out on a short tour, and perform all the songs from the album, including some covers from that period, which is something we've rarely done... I thought it could be a nice way to celebrate this little record that changed my life." - JD McPherson

"I was having nightmares every night, thinking, 'Wow, they're going to hate this," says JD McPherson.

When he talks about his new album, Undivided Heart & Soul, there's no glimmer of self-adulation, or even the confidence one might expect of a veteran artist. Instead, there's a snapshot of McPherson's creative process bringing the record to life, a journey filled with fear and change, then boldness, and, eventually, catharsis.

The best rock music has a story to tell. This record chronicles a series of upheavals, frustrations, roadblocks, and kismet—a cross-country move, failed creative relationships, a once-in-a-lifetime career opportunity, and learning to love making music again by letting go.

McPherson calls moving his family from Broken Arrow, Oklahoma, to East Nashville a decision based "on opportunity" and one he was reluctant to make but notes the profound influence the city has had on his new crop of songs.

"Up to this point, I thought I knew what I was doing with songwriting, that I don't do this or that," McPherson says. "Writing with people who co-write for a living...maybe I saw myself as John Henry, and them as the steel-driving machine."

Along with collaborations with fellow Oklahoman Parker Millsap, Butch Walker, and Aaron Lee Tasjan, McPherson's selections for Undivided Heart & Soul include many deeply personal themes: "Let's Get Out of Here While We're Young" shares writing credits with longtime bandmate Ray Jacildo and McPherson's wife Mandy. He also delved into character profiles, both fictional and based on real-life experiences, stories McPherson has held onto but never thought of as fodder for songwriting, such as the Las Vegas bus station interlude detailed in "Style (Is a Losing Game)."

"That seems like a pretty normal thing for a singer-songwriter to do, to write about personal experience, but I really have never done that," McPherson says. "It felt great but it also was tough at the same time. The thing is, John Henry is trying to beat the machine because he's in awe of it. It was a lot of me saying, 'You're really good at this, and I have a hard time doing it.'"

With a group of soul-baring tracks taking shape, McPherson and crew scheduled studio time to help force the issue. It quickly became apparent that these sessions were not going to work, bringing McPherson’s momentum to a halt.

To clear his head, he flew to Los Angeles at the invitation of friend and longtime supporter Josh Homme of Queens of the Stone Age, who was also recording at the time. McPherson, Homme, and his Queens bandmate Dean Fertita played around with some songs, with Homme pushing McPherson outside of his comfort zone in a no-stakes environment.

"His thing was, 'I'm going to throw all kinds of crap onto your songs that you're not going to want to hear, and you're going to play ridiculous stuff you wouldn't normally do,' and Dean was kind of the calming presence," McPherson says.

McPherson calls the getaway "the most fun I've had since I was 15 years old" and returned to Nashville with a clear head, internal filters successfully stifled, ready to move forward.

That fresh perspective in tow, McPherson learned that the long-shot "backup" studio, the legendary RCA Studio B in Nashville, was willing to host his band for the making of the record. RCA Studio B was fundamental to the creation of the "Nashville Sound," and the ghosts of some of the greatest songs in history live within its walls: Dolly Parton's "I Will Always Love You," and Elvis Presley's "Are You Lonesome Tonight?" among them.

Artists who choose to record at Studio B are met with a rigorous list of requirements, including using a recording method appropriate during the studio's heyday. Since the studio is a working museum by day, the entirety of McPherson's workspace had to be reset at night: Load in all equipment in the late afternoon, work until 3:00 or 4:00 a.m., and leave no trace nightly. Repeat. Repeat. Repeat.

"Those rules would probably turn a lot of bands off, but they turned us on, 100 percent," McPherson says. "I really love walking into a classic studio as much as I love getting my hands on a really old guitar. I like knowing that something was used for a long time and has good things in it."

But this isn't an old Nashville record, by any measurement, nor is it the record McPherson set out to make, with credit due to co-producer Dan Molad (also the drummer for Lucius).

"There's a pretty broad gap in our tastes, what we do and what we're into," McPherson says. Where he’s as likely to lean on The Cramps as he is Irma Thomas for inspiration, Molad's left-field production suggestions included a Casio synthesizer and running a Fender Rhodes through a tape delay. (McPherson nixed the former; the latter became the signature sound of one of the record's tracks.) "We ended up learning a lot from each other, and he did a lot of stuff I'd have never thought to do."

During the song "Let's Get Out of Here While We're Young," JD sputters the line "We've worn out all the songs we've sung." This is not a statement McPherson takes lightly.

Undivided Heart & Soul is a statement record, one that asserts McPherson as he is now, battle-weary but stronger than ever.

About the opener, Michaela Anne:
Full of lush, sweeping arrangements and honest, deeply vulnerable self-examination, ‘Desert Dove’ marks a bold new chapter for Michaela Anne, both artistically and professionally. While the songwriting is still very much rooted in the classic country she’s come to be known for, the record (her first for Yep Roc) represents something of a sonic shift, incorporating more modern production elements than ever before in pursuit of a sound that owes as much influence to indie rock as honky tonk. Despite the bolder, more adventurous arrangements, Michaela’s crystalline voice remains front and center on the album, a pure, airy beam of light shining bravely into the dark corners of loneliness, pain, and desire that we all so often to try to hide.

Produced jointly by Sam Outlaw and Delta Spirit’s Kelly Winrich and recorded with an all-star band that included guitarist Brian Whelan (Dwight Yoakam, Jim Lauderdale), fiddler Kristin Weber (Kacey Musgraves, Margo Price), and drummers Mark Stepro (Ben Kweller, Butch Walker) and Daniel Bailey (Everest, Father John Misty), ‘Desert Dove’ is an achingly beautiful collection, with songs that frequently find themselves balancing optimism and fatalism in the very same breath. There’s an undercurrent of yearning in Michaela’s music (the melancholy “Be Easy,” for instance, chases a peace of mind that never comes, while the breezy “Child Of The Wind” longs for connection and permanence in the face of perpetual itinerancy), as well as a fiercely feminine perspective that’s assured in its power and unapologetic in its candor. The prostitute of the title track challenges the traditional perception of women as a source of comfort and service for men (“You love them all the way they want and they need / But tell me who does your heart wish to please?” she asks), and the spirited “If I Wanted Your Opinion” offers up an all-purpose response to gendered condescension.

Michaela first began garnering national attention with the 2014 release of ‘Ease My Mind,’ an old-school collection hailed by The New York Times for its “plain-spoken songs of romantic regret and small-town longing” and named one of the year’s best country albums by The Village Voice. After a move from Brooklyn to Nashville, Michaela followed it up in 2016 with the similarly lauded ‘Bright Lights and the Fame,’ which featured guest appearances by Rodney Crowell and Punch Brother Noam Pikelny. NPR said Michaela “works through weepers and hits the honky-tonks as every great country singer should,” while Rolling Stone compared her to Linda Ronstadt and Emmylou Harris, and Vice Noisey praised her as the antidote to commercial pop country, calling her “our saving grace, our angel, the person who will help usher us into a new age.” Songs from the record landed on high profile Spotify playlists as well as the HBO series ‘Divorce,’ and the album earned Michaela slots at Bristol Rhythm & Roots, Merlefest, and both the US and UK iterations of AmericanaFest, along with a seemingly endless series of dates across the States and Europe with the likes of Mandolin Orange, Courtney Marie Andrews, Joe Pug, Ron Pope, and Sam Outlaw.

Since the release of Desert Dove on Yep Roc Records in September 2019, the critical acclaim has continued. The album has received national praise from a multitude of outlets that include Billboard, Rolling Stone Country, NPR, Paste Magazine, Wide Open Country, Brooklyn Vegan, Albumism, Associated Press, No Depression, The Bluegrass Situation and The Boot. Regionally, Michaela has appeared in print in Nashville Scene and Nashville Lifestyles, who commented that, “The classic country-style songs sound as if they’re being sung from an expansive cave or a massive honky tonk... the effect is a group of acoustic songs with the brevity of country songwriting and the capricious intensity of indie rock.” The fall of 2019 saw Michaela’s debut on Mountain Stage while Philadelphia’s WXPN named her their Artist of the Month. Desert Dove has been appearing on multiple end of year lists including Albumism’s top 50 best albums of 2019 as well as both Stereogum and Rolling Stone Country’s top 10 best Country & Americana albums of 2019. Rolling Stone Country described the album as “a textured portrayal of turmoil and restlessness set to a mix of West Coast-country, atmospheric indie-rock indebted reverb and plaintive folk-pop.” while Stereogum considered Michaela as “hard to pigeonhole” with “a perspective so uniquely her own on Desert Dove, an album that paints a story of a life lived on her own terms.” They summed it up even more concisely, saying Michaela and the album were simply “impossible to forget.”