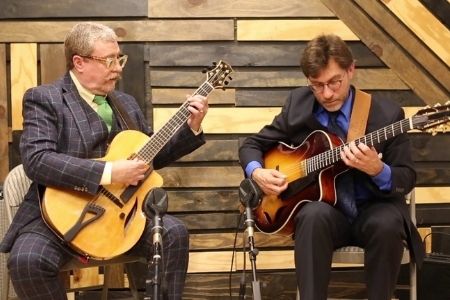 Martin Taylor is a multi-award winning guitarist and Acoustic Guitar magazine calls him ''THE Acoustic Guitarist of his Generation''. He dazzles audiences with his solo shows, which combine virtuosity, emotion, humor, and a strong stage presence while his inimitable style has seen him recognized as the world''s foremost exponent of solo fingerstyle guitar playing. Taylor has invented and developed a way of playing the guitar that is admired, and often imitated, by guitarists all over the world.
Collaborations with artists including Jeff Beck, Tommy Emmanuel, Bill Wyman, Chet Atkins, David Grisman, Dianne Schuur and Gary Burton have seen him garner two honorary doctorates, a BBC lifetime achievement award, Top 10 albums in both the USA and Europe, a record 14 British Jazz Awards and in 2002 he was appointed MBE 'For Services to Jazz Music' by Her Majesty the Queen of Great Britain. As one of the world's most recognized online guitar teachers his innovative online guitar school with its headquarters in Napa, CA has been featured on NPR, BBC, Fox News and the LA Times and is subscribed to by guitarists in over 58 countries.

Frank Vignola, born December 30th, 1965, is one of the most extraordinary guitarists performing before the public today. His stunning virtuosity has made him the guitarist of choice for many of the world's top musicians, including Ringo Starr, Madonna, Donald Fagen, Wynton Marsalis, Tommy Emmanuel, the Boston Pops, the New York Pops, and guitar legend Les Paul, who named Vignole to his "Five Most Admired Guitarists List: for the Wall Street Journal. Vignola's jaw- dropping technique explains why the new York Times deemed him "one of the brightest stars of the guitar".

With over 1000 engagements in the last five years alone, Frank Vignola has become one of the most popular and sought after guitarists on the international music scene. His dynamic genre-spanning music has brought him to 14 countries on three continents - and still growing - performing in some of the world's most illustrious venues, including the Sydney Opera House in Australia, Carnegie Hall, The Palace of Fine Arts in San Francisco, New York's Lincoln Center and the world's oldest indoor concert hall, Teatro Olimpico in Vicenza, Italy.