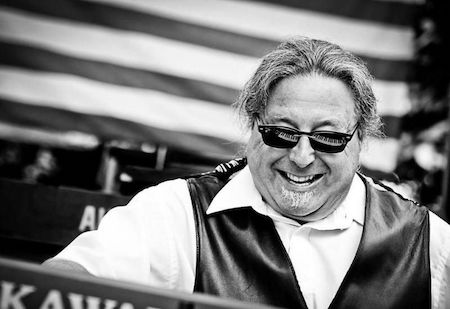 About Anthony Geraci:
Pianist, Hammond organist and composer Anthony Geraci was born in New Haven, Conn. in 1954.  His interest in playing piano began at age four when he told his parents “I want a piano!”  Kind of an odd request when most kids want a new baseball glove or bicycle. His parents weren’t musical-not even a record player at their house- but they always supported their son’s undeniable passion for music. They soon bought a Kimball Grand Piano that his mother paid 4 dollars a week to own. Lessons at the Neighborhood School of Music which was affiliated with Yale University soon followed. At around the age of sixteen he befriended a fellow musician, Ed Cherry at high school. They soon began listening to music together after school and one day Ed played a Jimmy Rogers recording, Chicago Bound that literally changed his life. Ed went on to be Dizzy Gillespie’s guitarist for many years.

New Haven was rich as far as listening to and seeing major music artists, and NYC was only a few hours away by train. Seeing Muddy Waters, B.B. King, and Willie Dixon was part of his blues education that could only be learned by seeing these great artists fist hand. Years later Anthony had the opportunity to play piano with Muddy Waters, B.B. King, Otis Rush, Chuck Berry, Big Mama Thornton, Big Joe Turner, Jimmy Rodgers and many more-something a sixteen year old budding blues pianist would never have seemed possible. Anthony has recorded with Big Walter Horton, Ronnie Earl, Big Jack Johnson, Zora Young, Sugaray Rayford, Debbie Davies, Kenny Neal and many more great Blues Artists. Anthony graduated from the Berklee College of Music with B.A. Degree, and a M.A. from Skidmore College. He continues to perform worldwide with Anthony Geraci and the Boston Blues All-Stars, and with the Proven Ones that features Kid Ramos, Willie J. Campbell, Jimi Bott and Brian Templeton.

His 2015 release, Fifty Shades of Blue, on Delta Groove Records has been met with acclaimed reviews and earned multiple Blues Music Award nominations from the Blues Foundation in Memphis, TN.  Nominations include: Best Song-for the title track, Best Album, and Best Traditional Blues Album.  Anthony  also received an individual nomination for the Pinetop Perkins Piano Player of the Year Award. Fifty Shades Of Blue was also nominated for Traditional Blues Album of the year by Blues Blast Magazine, and was ranked as one of the top 50 Blues recordings of 2015 by Living Blues Magazine, and earned a 4 Star Review in Downbeat Magazine.

Anthony is back in the studio and is set to release a new recording in the Spring of 2020.  He has once again been nominated for the Pinetop Perkins Piano Player 2020 Blue Music Award by the Blues Foundation.