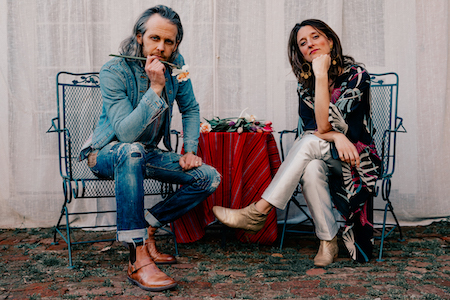 Pioneering folk musicians David Wax and Suz Slezak are the plucky husband-wife duo behind the eclectic, exuberant “Mexo-Americana” band David Wax Museum. In addition to their national TV debut in 2019 on CBS This Morning: Saturday, the band has been featured in The New York Times, Rolling Stone, TIME Magazine and The New Yorker. They built bridges performing at the wedding of Democratic presidential hopeful (now Transportation Secretary) Pete Buttigieg and his husband Chasten--and in 2021 their plaintive ballad “Big Sur” debuted during the marriage scene on Netflix #1 show, Firefly Lane.

In early 2022, David and Suz return to the road, bursting with songs from two new albums (Remember My Future and Euphoric Ouroboric), as well as Suz's debut solo album, Our Wings May Be Featherless (releasing March 4, 2022 on Nine Mile Records). They are joined by indominable multi-instrumentalist Alec Spiegelman, whose extraordinary talent is showcased on both new band albums, which he produced at his Brooklyn studio. The combined musicianship of these three artists, who have been performing and recording together for nearly 15 years, is absolutely electric on stage. Prepare yourself for an unforgettable evening.